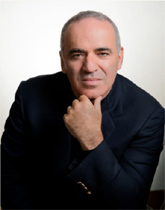 Garry Kasparov, a legend in the international sports arena for his 20-year reign as the world’s #1 chess player, Kasparov was also a pioneer thanks to his famous matches against the IBM super computer Deep Blue. In 2005 Kasparov retired from professional chess to lead the pro-democracy opposition against the dictatorial regime of Vladimir Putin, including a run for the presidency of Russia in 2008. Kasparov is a popular speaker to business groups around the world on topics of strategy, innovation and leadership. His 2007 book on decision-making “How Life Imitates Chess”, has been published in over a dozen languages. He has been a contributing editor to the Wall Street Journal since 1991.

Today he delivers keynote speeches around the globe and is working on another book while also devoting time to the “Kasparov Chess Foundation”. He is active as a pro-democracy leader in the fight to restore democracy in Russia.

How Life Imitates Chess: Making the Right Moves, from the Board to the Boardroom

One of the most highly regarded strategists of our time teaches us how the tools that made him a world chess champion can make us more successful in business and in life. Garry Kasparov was the highest-rated chess player in the world for over twenty years and is widely considered the greatest player that ever lived. In How Life Imitates Chess Kasparov distills the lessons he learned over a lifetime as a Grandmaster to offer a primer on successful decision-making: how to evaluate opportunities, anticipate the future, devise winning strategies. He relates in a lively, original way all the fundamentals, from the nuts and bolts of strategy, evaluation, and preparation to the subtler, more human arts of developing a personal style and using memory, intuition, imagination and even fantasy. Kasparov takes us through the great matches of his career, including legendary duels against both man (Grandmaster Anatoly Karpov) and machine (IBM chess supercomputer Deep Blue), enhancing the lessons of his many experiences with examples from politics, literature, sports and military history. With candor, wisdom, and humor, Kasparov recounts his victories and his blunders, both from his years as a world-class competitor as well as his new life as a political leader in Russia. An inspiring book that combines unique strategic insight with personal memoir, How Life Imitates Chess is a glimpse inside the mind of one of today's greatest and most innovative thinkers.

Winter Is Coming: Why Vladimir Putin and the Enemies of the Free World Must Be Stopped

The stunning story of Russia's slide back into a dictatorship-and how the West is now paying the price for allowing it to happen.