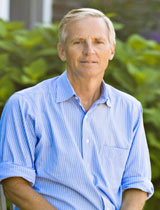 Evan Thomas is the author of ten books, including the New York Times bestsellers John Paul Jones, Sea of Thunder, and Being Nixon. Thomas was a writer, correspondent, and editor for thirty-three years at Time and Newsweek, including ten years as Washington bureau chief at Newsweek, where, at the time of his retirement in 2010, he was editor at large. He wrote more than one hundred cover stories and in 1999 won a National Magazine Award. He wrote Newsweeks election specials in 1996, 2000, 2004 (winner for Newsweek of the National Magazine Award), and 2008. He appears on many TV and radio talk shows, including Meet the Press and Morning Joe. Thomas has taught writing and journalism at Harvard and Princeton, where, from 2007 to 2014, he was Ferris Professor of Journalism.

Being Nixon: A Man Divided

The landmark New York Times bestselling biography of Richard M. Nixon, a political savant whose gaping character flaws would drive him from the presidency and forever taint his legacy.

Ike's Bluff: President Eisenhower's Secret Battle to Save the World

Upon assuming the presidency in 1953, Dwight Eisenhower set about to make good on his campaign promise to end the Korean War. Yet while Eisenhower was quickly viewed by many as a doddering lightweight, behind the bland smile and simple speech was a master tactician. To end the hostilities, Eisenhower would take a colossal risk by bluffing that he might use nuclear weapons against the Communist Chinese, while at the same time restraining his generals and advisors who favored the strikes. Ike's gamble was of such magnitude that there could be but two outcomes: thousands of lives saved, or millions of lives lost. A tense, vivid and revisionist account of a president who was then, and still is today, underestimated, IKE'S BLUFF is history at its most provocative and thrilling.

The Wise Men: Six Friends and the World They Made with a new introduction by the authors

The Wise Men introduces the original brightest and best, leaders whose outsized personalities and actions brought order to postwar chaos: Averell Harriman, freewheeling diplomat and Roosevelt's special envoy to Churchill and Stalin; Dean Acheson, the secretary of state who was more responsible for the Truman Doctrine than Truman and for the Marshall Plan than General Marshall; George Kennan, author of Containment; Robert Lovett, assistant secretary of war, undersecretary of state, and secretary of defense during the Cold War; John McCloy, one of the nation's most influential private citizens; and Charles Bohlen, adroit diplomat and ambassador to the Soviet Union.

The Man To See

Legendary attorney Edward Bennet Williams was arguably the best trial lawyer ever to practice. Now, for the first time, best-selling author Evan Thomas takes us into the courtrooms of William's greatest performances as he defends "Godfather" Frank Costello, Jimmy Hoffa, Frank Sinatra, The Washington Post, and others, as well as behind the scenes where the witnesses are coached, the traps set, and the deals cut. In addition to being a lawyer of unprecedented influence, Williams was also an important Washington insider, privy to the secrets of America's most powerful men. Thomas tells the truth behind the stories that made Williams one of the most talked about public figures of his time, including Williams' role in the publication of the Pentagon Papers and the possibility that Williams may have been Watergate's Deep Throat. Based on Thomas's exclusive access to Williams's papers, "The Man to See" is an unprecedented look at the strategies and influence of this exceptional man.

Evan Thomas takes us inside the naval war of 1941-1945 in the South Pacific in a way that blends the best of military and cultural history and riveting narrative drama. He follows four men throughout: Admiral William ("Bull") Halsey, the macho, gallant, racist American fleet commander; Admiral Takeo Kurita, the Japanese battleship commander charged with making what was, in essence, a suicidal fleet attack against the American invasion of the Philippines; Admiral Matome Ugaki, a self-styled samurai who was the commander of all kamikazes and himself the last kamikaze of the war; and Commander Ernest Evans, a Cherokee Indian and Annapolis graduate who led his destroyer on the last great charge in the last great naval battle in history.

John Paul Jones, at sea and in the heat of the battle, was the great American hero of the Age of Sail. He was to history what Patrick O'Brian's Jack Aubrey and C. S. Forester's Horatio Hornblower are to fiction. Ruthless, indomitable, clever; he vowed to sail, as he put it, "in harm's way." Evan Thomas's minute-by-minute re-creation of the bloodbath between Jones's Bonhomme Richard and the British man-of-war Serapis off the coast of England on an autumn night in 1779 is as gripping a sea battle as can be found in any novel.

He was "Good Bobby," who, as his brother Ted eulogized him, "saw wrong and tried to right it . . . saw suffering and tried to heal it." And "Bad Bobby," the ruthless and manipulative bully of countless conspiracy theories. Thomas's unvarnished but sympathetic and fair-minded portrayal is packed with new details about Kennedy's early life and his behind-the-scenes machinations, including new revelations about the 1960 and 1968 presidential campaigns, the Cuban Missile Crisis, and his long struggles with J. Edgar Hoover and Lyndon Johnson.

The Very Best Men: The Daring Early Years of the CIA

The Very Best Men is the story of the CIA's early days as told through the careers of four glamorous, daring, and idealistic men who ran covert operations for the government from the end of World War II to Vietnam. Evan Thomas re-creates the personal dramas and sometimes tragic lives of Frank Wisner, Richard Bissell, Tracy Barnes, and Desmond FitzGerald, who risked everything to contain the Soviet threat.

The War Lovers: Roosevelt, Lodge, Hearst, and the Rush to Empire, 1898

On February 15th, 1898, the American ship USS Maine mysteriously exploded in the Havana Harbor. News of the blast quickly reached U.S. shores, where it was met by some not with alarm but great enthusiasm. A powerful group of war lovers agitated that the United States exert its muscle across the seas. Theodore Roosevelt and Henry Cabot Lodge were influential politicians dismayed by the "closing" of the Western frontier. William Randolph Hearst's New York Journal falsely heralded that Spain's "secret infernal machine" had destroyed the battleship as Hearst himself saw great potential in whipping Americans into a frenzy. The Maine would provide the excuse they'd been waiting for.