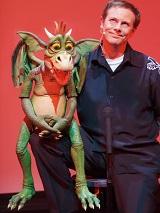 As hard as it is to believe, Ronn Lucas has been entertaining and amazing fans for more than 45 years with his incredible, and unique art form. No stranger to any media, Lucas has appeared on past national TV programs including The Late Show with David Letterman, The Tonight Show with Jay Leno, The Tonight Show with Johnny Carson, America’s Funniest Home Videos, Who’s In Charge Here (the Disney Channel) and FX Network’s hit show “nip/tuck.” He scored a solo documentary done about him for CBS’ in-flight TV news program “Eye in the Sky.” In addition, Lucas has been featured in a wide range of print articles; from People, and ‘US’, to National Geographic, and Time. There seems to be no one who doesn’t like Ronn Lucas.

He continues to receive many accolades including “The World’s Best Ventriloquist,” by The New York Times and The Times, London. He’s been honored as “Entertainer of the Year,” by San Francisco’s famed Gold Cabaret Awards ; and was labeled “Ventriloquist of the Year” by his USA peers – the American Society of Ventriloquists. Over the decades, Ronn has hosted his own long-running TV Variety Series for the British TV, and had a brief TV series for CBS. He’s performed for several United States Presidents; and has done for a string of command performances for the British Royal Family, including Her Royal Highness, Queen Elizabeth II. From 2001 until 2009 he became the first ventriloquist to have his own long-running stage show in Las Vegas. The longest ‘Vegas run of any ventriloquist, so far.

A true expert of vocal trickery (combined with some master’s skills in the art of puppetry taught to him by the great Jim Henson) Ronn Lucas has logged more than 70,000 hours perfecting his craft. Lucas mixes theatrical artistry with quirky humor to create a show for that nearly lost demographic – the proverbial ‘Show For ALL Ages.’ …As an on-line reviewer put it, “Lucas’ [in Las Vegas] is the only adult show that’s kid-safe. If you let your kids watch “Shrek” or “The Simpsons”, you’ll be fine. Heck, your kids’ll probably explain it to you!” …The San Francisco Chronicle once wrote, “Ronn Lucas is to ventriloquism, what NASA is to a bottle rocket. He’s deviously hilarious, and he has delightful voice that tricks you’ll never ‘see’ coming.”

Ronn Lucas is currently planning for 2022, to star in his own solo Gang-of-One tour. Lucas smiles as he refers to it, “The one man show with the most ‘people’ in it…” Ronn will continue to insist on meeting all of his fans after every show. He’s always in the lobby signing free autographs. It’s where he’s most often deluged with praise. If a patron, face-to-face with Ronn, says anything critical, it almost always goes something like this: “I’m not a fan of ventriloquists, but my spouse dragged me to your show. Now, I’m glad I came. That was the funniest thing I’ve ever seen! I laughed ‘til my stomach hurt.” Ronn usually responds with, “I don’t care much for ventriloquists either. That’s why I put together the show that you just saw. I hope you’ll return.” Funny thing? – They always do!

Did you ever wonder if ventriloquism could: • Help you get a better deal on a new car? • Improve your pick-up lines in a bar? • Save the ozone layer? • Stop a thermo-nuclear war? The answer to all of these Big Questions is "Yes!" And these modest goals are just the beginning. In your hand you hold all the ventriloquism know-how and how-to's to get you out of any tricky situation--as long as your hand does all the talking. With practice scripts, real-life scenarios, and a starter hand puppet, Better Living through Ventriloquism will help you get that great job, take charge of any situation, and generally improve your life and that of the world around you.