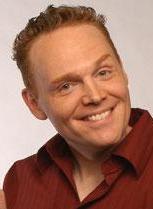 Over the last ten years, Bill Burr has established himself as one of the finest working comedians in the country. Whether appearing on Conan O’Brien or Showtime at the Apollo, Burr‘s style of comedy is able to connect with the audience.

Bill Burr grew up in a large family outside of Boston, getting his first laughs by imitating his lunatic father. Always putting laughter before his studies, Bill‘s dreams of pursuing any sort of respectable profession died in the sixth grade.