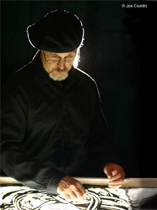 It all began innocently enough. A simple “honey do” list sent Joe Castillo to his local home improvement store. It was an ordinary trip, but Joe has always been able to see beyond the mundane. As he made his way down the sand aisle, he noticed a bag had opened and spilled on the concrete floor. Shoppers had scuffled through the sand, leaving lines and patterns. “I found myself dragging the toe of my sneaker through the sand,” recalls Joe. “I made it home with my ‘honey do’ list, but I also had a bag of sand, a kitchen light fixture, a piece of glass, and four table legs. And a SandStory was born.”

That commonplace “honey do” trip was the catalyst that eventually took Joe into the living rooms of over 23 million viewers around the world as a finalist on the hit television show, America’s Got Talent in 2012.

Born in Mexico City, Joe was strongly influenced by his artistic family and the international art community. His mother taught painting, and his father owned a graphic design and display company. By age five, he was enrolled in his mom’s art class for the neighborhood children. When Joe was fifteen, his dad passed away and his family moved back to the U.S. where Joe finished high school and enrolled in Florida Bible College, earning his Bachelor’s degree in Bible. Joe combined his love for writing, teaching, and art to create what he called a WordStory and soon began speaking regularly at numerous events. His ability to speak both English and Spanish also helped extend his reach into places where others could not go.

Joe hesitantly began using his talents in commercial arts and started an advertising agency, which he built over the course of 20 years. But after his first wife died of breast cancer, Joe reassessed his life, gave up his agency and went back to school, graduating from Asbury Seminary.

Those humble beginnings launched a career unparalleled by anyone else in the world. Joe has created SandStory performances for Fortune 500 companies such as CBS, Walt Disney Company, NBC, Mercedes-Benz, P&G, and Apple, as well as over thirty other major corporations. And though he has used his talents to entertain world leaders in more than 18 countries around the globe, Joe remains humble and appreciative of the opportunities he has been given.