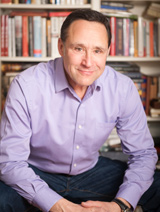 Ted Reinstein is best known in New England as a journalist and reporter for “Chronicle,” Boston’s celebrated—and America’s longest-running, locally-produced—TV newsmagazine. While he appears occasionally in the studio at the anchor desk or delivering an opinion commentary, it’s out in the field where viewers are most familiar seeing Ted. From every corner of New England, he’s found the offbeat, the unique, the moving, and the just plain memorable, all while telling the enduringly colorful stories of the region’s people and places.

Ted has also been a regular contributor for WCVB’s political roundtable show, “On The Record,” and has been a member of the station’s editorial board since 2010. In 2002, he was part of a “Chronicle” team which received a national DuPont-Columbia Broadcast Journalism Award for coverage of Boston’s controversial Big Dig, and how such massive public works projects compare around the world. In 2018, he received an Emmy Award for his story on the “Good Night Lights” phenomenon in Providence, Rhode Island.

Elsewhere on television, Ted hosted the premiere season of the Discovery Channel’s Popular Mechanics show, and brought viewers up-close to some of America’s most iconic landmarks for the HGTV network’s special, “Lighthouses.” For the Travel Channel’s photo-adventure series, FreezeFrame, he explored Hawaii’s volcanoes, the caves of Puerto Rico, and the South Pacific islands of Tahiti.

Ted received his bachelor’s and master’s degrees from Brandeis University. He has two daughters, and lives just west of Boston.

In the April of 1945, exactly two years before Jackie Robinson broke the color barrier in major league baseball, liberal Boston City Councilman Izzy Muchnick persuaded the Red Sox to try out three black players in return for a favorable vote to allow the team to play on Sundays. The Red Sox got the councilman’s much-needed vote, but the tryout was a sham; the three players would get no closer to the major leagues. It was a lost battle in a war that was ultimately won by Robinson in 1947. This book tells the story of the little-known heroes who fought segregation in baseball, from communist newspaper reporters to the Pullman car porters who saw to it that black newspapers espousing integration in professional sports reached the homes of blacks throughout the country.

Explore the fabric of America over hot coffee and penny candy.

Step through the wooden doors of a New England general store and step back in time, into a Norman Rockwell painting and into the heart of America. New England’s General Stores offers a nostalgic picture of this colonial staple and, fortunately, steadfast institution of small towns from Connecticut to Maine. This is where children of each generation take their first allowance to buy their very own penny candy. Locals have swapped stories at these counters from gossip to whispers of revolution. In tough times, the general store treated customers like family, extending credit when no one else would. Stubborn as New Englanders themselves, the general store has refused to become a mere sentimental relic of an earlier age.

From sports to politics, food to finance, aviation to engineering, to bitter disputes over simple boundaries themselves, New England's feuds have peppered the region's life for centuries. They've been raw and rowdy, sometimes high minded and humorous, and in a place renowned for its deep sense of history, often long-running and legendary. There are even some that will undoubtedly outlast the region's ancient low stonewalls. Ted Reinstein, a native New Englander and local writer, offers us fascinating stories, some known, others not so much, from the history of New England in this fun, accessible book. Bringing to life many of the fights, spats, and arguments that have, in many ways, shaped the area itself, Reinstein demonstrates what it really means to be Wicked Pissed.

Looking to buy some medieval armour? In the mood for an orchestra of typewriters? Perhaps you'd like to sift through handcrafted cashmere scarves while chatting up Indiana Jones' lovely co-star? Know where to find America's oldest baseball diamond, New England's smallest town, or Grover Cleveland's impossibly-young (and spitting-image) grandson (think about it)? New England Notebook offers the answers to these questions and more in a blend of the region's most singular and noteworthy nuggets of history, people, and culture. This is a collection of colorful facts, stories and anecdotes, plus a savvy selection of unusual eats, goods, services and events. Whether it's finding a little-known museum of Titanic memorabilia, an underwater escape artist, or the smallest bar, both casual readers and dedicated lovers of all things New England will share a hearty-and humorous-sense of, "Who knew?" Written by a native New Englander and WCVB on-air reporter, New England Notebook goes beyond the merely curious, though it offers plenty of intriguing tidbits, unusual museums, fascinating characters, and many pieces of trivia and little-known facts.