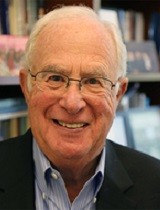 Dr. Stuart Altman, Sol C. Chaikin Professor of National Health Policy at The Heller School for Social Policy and Management, Brandeis University, is an economist with five decades of experience working closely with issues of federal and state health policy within government, the private sector, and academia.

He has demonstrated leadership in health care through service on numerous government advisory boards on both the federal and state levels, including service as the Deputy Assistant Secretary for Planning and Evaluation/Health at the U.S. Department of Health Education and Welfare (HEW) from 1971 to 1976; as Chairman of the Prospective Payment Assessment Commission (ProPac) from 1984 to 1996; and in 1997 as an appointed member of the National Bipartisan Commission on the Future of Medicare. In total, Dr. Altman acted as advisor to five U.S. presidential administrations. He also served as Chair of the Institute of Medicine’s Committee for the Evaluation of the Future of Nursing Campaign for Action in the 2015. In January 2016 Governor Charles Baker re-appointed Dr. Altman to chair the Massachusetts Health Policy Commission as part of the states’ attempt to moderate the growth in healthcare spending.

Dr. Altman has also been recognized as a leader in the health care field by Health Affairs and by Modern Healthcare, which named him in 2006 among the 30 most influential people in health policy over the previous 30 years, and which from 2003 to 2011 named him one of the top 100 most powerful people in health care. In 2014 he was awarded the Graham Life Time Achievement Award in Health Services Research by the Association of Health Administration Programs. Recently he received the Champion of Health and Wellness award by the Massachusetts Health Council. He has served on the Board of Directors of several for-profit and not-for-profit companies, and he is a member of The Institute of Medicine and chairs the Health Industry Forum at Brandeis University. He is a published author of numerous books and journal articles, the most recent, Beyond Antitrust: Health Care and Health Insurance Market Trends and the Future of Competition (2017) and Power, Politics and Universal Health Care: The Inside Story of a Century-Long Battle (2011). In addition to teaching at Brandeis, Dr. Altman has taught at Brown University and at the Graduate School of Public Policy at the University of California at Berkeley and the University of North Carolina. He served as Dean of the Heller School from 1977 to 1993 and from 2005 to 2008. He also served as interim President of Brandeis University from 1990 to 1991.

Power, Politics, and Universal Health Care: The Inside Story of a Century-Long Battle

Essential reading for every American who must navigate the US health care system.

Why was the Obama health plan so controversial and difficult to understand? In this readable, entertaining, and substantive book, Stuart Altman—internationally recognized expert in health policy and adviser to five US presidents—and fellow health care specialist David Shactman explain not only the Obama health plan but also many of the intriguing stories in the hundred-year saga leading up to the landmark 2010 legislation. Blending political intrigue, policy substance, and good old-fashioned storytelling, this is the first book to place the Obama health plan within a historical perspective.